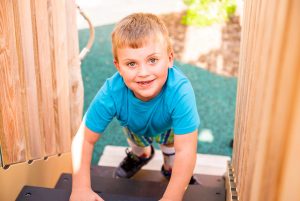 With a nickname like “Mr. Social,” you can imagine that 4-year-old Trenton Moore has never met a stranger. That may be why he decided to start life a little early at just 27 1/2 weeks. Just hours after birth, Trenton’s health unexpectedly declined and he was given a 2 percent chance of survival. This sudden reality was a shock to both his parents and his grandparents, who adore him.

After a brain bleed and two brain surgeries before he turned 2-years-old, Trenton was diagnosed with cerebral palsy. Last year, he underwent a special spinal surgery that doctors felt would give him the best chance of walking on his own. But there were many challenges ahead. Due to the intense physical therapy required for kids with cerebral palsy, Trenton and his family would have to travel to Birmingham frequently for him to receive the best care possible. The Moores live three hours away near Enterprise and the financial and emotional burden of the travel worried his family.

“If it had not been for the Ronald McDonald House, we would not have survived financially,” Trenton’s grandmother, Melinda Dooley, said.

Thankfully, the Ronald McDonald House lifts the burdens that families like the Moores should never face—sleeping in cars, costly living expenses, long drives to and from the hospital, and being far from friends and family. We provide a comfortable bed, meals prepared by volunteers and a sense of community so families don’t have to face their challenges alone.  And while some families donate to help cover their costs, no family is every turned away if they cannot afford to contribute.

“It is a relief to know that we have somewhere to come to that has supper cooked, food in the kitchen and a place to lay our heads after a long day,” his mother Rebecca said. “Trenton is so excited to go to the Ronald McDonald House because y’all have so many different things for him to do that makes him feel normal.” 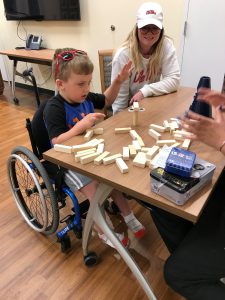 “There were ladies that showed up and dressed up as characters from the Disney movies. Trenton had never seen anything like that! And a college golf team played games with him one night and made him feel important and feel special,” Melinda adds.

The ability for him and his family to stay close to the hospital has made a world of difference for Trenton. In April of this year, he started walking with assistive canes and Trenton’s family knows that their amazing child is striving for much more.

“As he goes to therapy he says that one day he is going to throw his walking canes down and walk, and I believe with all my heart that he will, because his mind is made up,” Rebecca said.

“I’ve walked and it felt wonderful,” Trenton says. “But I fell when I was racing to the door,” he added, giggling.

Trenton joyfully tells us his dream is to be a runner one day and beat his sister, Bailey!

“Caring for Trenton wouldn’t have been possible if we’d had to stay at a hotel,” his grandfather, Vince said. “There are a lot of things that the Ronald McDonald House has afforded us to be able to do because our finances are better spent on things we need for Trenton.”

“There’s a special tricycle that we wanted for Trenton and we were able to get that tricycle for him. That’s something we wouldn’t have been able to do if we’d had to spend our money traveling or on a hotel. When you stay here at the Ronald McDonald House, it’s close enough to go to the zoo. Trenton rode a camel, fed the birds and saw the seal that waved at him. It’s something we wouldn’t have been able to experience if were weren’t here,” Melinda said.

While Trenton is working hard in physical therapy, his family says that staying at the House relieves a lot of stress. 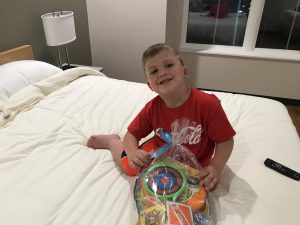 Trenton relaxes in the family’s guest room at the Ronald McDonald House.

“There’s always hope. But before the Ronald McDonald House it was more like feeling helpless. You just hope for the best and we’ve had a better outcome than I could ever hope for,” Vince said.

“If you were at therapy all day and you come into the House, somebody had been in the kitchen cooking supper. And that was nice to know that each night, we had something good to eat,” Melinda adds.

Trenton and his family continue to stay at the Ronald McDonald House while he continues physical therapy to learn how to walk.

“When we first started out, I had such a horrible feeling that ‘this isn’t gonna happen,'” Vince said. “But the encouragement and the love and the support that we’ve gotten from the people at the Ronald McDonald House has made it bearable. And now that I see Trenton’s progress, I can see us going and walking and going fishing. I won’t have to tote a wheelchair. Someday to just go fishing and play in the park, it’s going to be awesome.”

We hope you have enjoyed learning about the Moore family. Their story, like so many others’, show the importance of our mission here at Ronald McDonald House Charities of Alabama.

We urge you to consider giving a gift today that will help keep families together and near the hospital when a child is sick or injured. Thank you for your support!

Watch Trenton and his family at the House! If you would like to view this video with Audio Descriptions, please click here.