Here at Ronald McDonald House Charities of Alabama, we like to share updates when possible on how some of our families are progressing in their healing. We are happy to share some big news from Nicholas Welch! 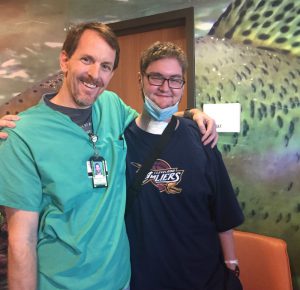 Those who have been following his story know that 13-year-old Nicholas found out in 2016 that he needed a new heart.

He was placed on the transplant list on October 10, 2016 but then his family was in a holding pattern, waiting for a match.

October turned into November and before the family knew it, it was Thanksgiving week. Teresa’s 17-year-old Joshua traveled about an hour and a half from their hometown of Ranburne to be with his mom and brother at RMHCA.

“I told Joshua, I said, ‘You’re going to be our good luck charm,’” Teresa said.

Teresa was right. The day before Thanksgiving, the hospital called her with the news they’d been waiting and praying for. 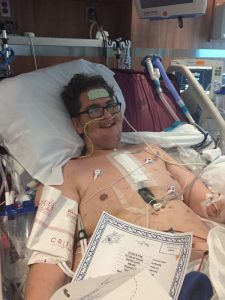 In the wee hours of Thanksgiving Day, Nicholas was in surgery, receiving his new heart.

“Best Thanksgiving you could ever ask for!” Welch said.

But Nicholas wasn’t out of the woods yet.

Doctors soon discovered his body was rejecting the new heart. Teresa tears up talking about it because she says they almost lost Nicholas at that time. The doctors then started him on a procedure called Extracorporeal Membrane Oxygenation (ECMO), which basically takes over for a patient’s heart and lung function so their own body can rest and recover.

To try and reverse his body’s rejection of the new heart, Nicholas also underwent plasmapheresis. Plasmapheresis removes the plasma from Nicholas’ blood, replaced with new plasma and transfused back into his body. In the case of an organ transplant, your body might think the new organ is a bad bacteria or virus and use antibodies in your blood to try and protect your body.

Nicholas would remain in the hospital for several months after his transplant while doctors made sure he was healthy and strong.

Teresa says through it all, her mother and father have been her “backbone” and she has felt lifted up by the support of her hometown.

“We have everybody there praying for him. It’s a small town but it is so close. They have helped us tremendously just by prayers, calls, texts. Anything that we need, they’re here,” she said.

Teresa says Nicholas was determined to get better and get back to RMHCA where they’ve made friends and found support from other families also navigating scary medical situations.

“It’s meant the world. It is home. We’ve made it home. When we were in the hospital, he told them he wanted to go home. And they would say, ‘Well, you can’t go home [to Ranburne].’ And he’d say, ‘No, I’m talking Ronald McDonald House,’” Teresa said. 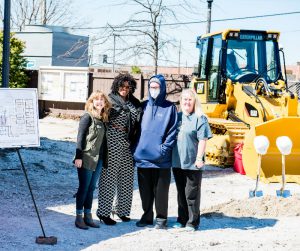 Fittingly, Nicholas was released from the hospital in time to attend the groundbreaking ceremony for RMHCA’s new wing.

Nicholas still eats a heart healthy diet but can enjoy the occasional slice of pizza brought to the House by one of RMHCA’s many volunteers.

But for now, mealtime can be solitary for Nicholas and Teresa. Because his immune system is so suppressed from his medical treatments, Nicholas must wear a mask around other people. He and Teresa will eat separate room if there are other families in the dining room. Teresa says it may seem odd but it’s a way to keep Nicholas healthy and not disturb other families.

“Everybody thinks we sit in the other room because we’re antisocial but to me it’s the only way I can keep him really safe. Because this is a house, it’s everybody’s house,” she said.

Nicholas still attends physical and occupational therapy sessions to regain the strength he lost while recovering from his transplant but Teresa says after everything, he’s doing very well. 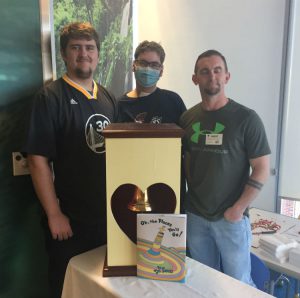 We hope you have enjoyed reading about how Nicholas is doing! Please help us continue serving the Welches and all our other families by donating or volunteering your time.