My Child Has Cancer – Mollie’s Journey 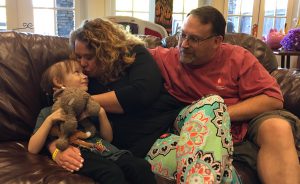 On any given summer day in Alabama, you can find kids playing with the sprinklers, enjoying a slip-n-slide or hanging out at the neighborhood pool. When temperatures are high and school is out, there’s no better way to spend your time. That’s just how 5-year-old Mollie was spending her time in late July. The Ford’s had turned their yard into the ultimate slip-n-slide fortress for their only daughter.

Then after a day in the sun in late July, Mollie came back inside completely exhausted. She wouldn’t play, she wouldn’t eat, she couldn’t sleep. Her parents knew something was not right. Suddenly, the slip-n-slide no longer seemed important.

That night, Mollie had a low-grade fever and an upset stomach. The next morning, her mom took her to Urgent Care in their hometown of Sylacauga, Alabama. They were sent home with antibiotics and the diagnosis of an ear infection. Later that afternoon, Amy, Mollie’s mom, knew there was something bigger happening to her sweet little girl.

Mollie continued to complain about a stomach ache — so Amy felt around her stomach. She felt a mass. Unsure of what to do, she waited a couple of hours and by the next morning, the mass felt like it had doubled in size. Mollie woke up, two days after her summer slip-n-slide day, as pale as a ghost.

Amy and Mollie rushed to the Emergency Room. After a CT scan and some blood work, Amy was told that her little girl had a large mass on her right kidney and they were being sent to Children’s of Alabama in Birmingham immediately.

“That was how I found out my child had cancer,” Amy told us as she shared their story.

An ambulance brought the two to Birmingham as quickly as they could and 48 hours later, the Ford’s were told they would have to stay in Birmingham for 6 months.

Amy blamed herself and struggled with what to do next. “I thought, our lives are over. We won’t be able to survive this.” 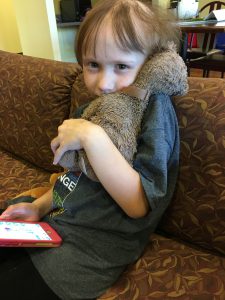 Mollie had been diagnosed with a Wilms Tumor requiring the removal of her kidney.  After the surgery, Mollie would be simultaneously undergoing chemotherapy and radiation.  It was going to be a long road to recovery and the Ronald McDonald House was full, but the Ford’s were placed on the waiting list by their social worker.

The Ford’s were able to bond with other families who were going through hard times and they were able to reassure their daughter that she was not alone. Mollie participated in every activity she could. One day, when a trip to The Red Barn was scheduled, she literally jumped off the treatment table and ran as fast as she could back to the Ronald McDonald House so that she would not miss the bus. Mollie felt safe at her new home and was able to be herself.

Mollie has responded better to every treatment than could have ever been predicted. Her family has since gone home and she has returned to kindergarten, but it is obvious she feels more at home at the Ronald McDonald House than she now does in Sylacauga. After a week at home, the Ford’s had to come back to Children’s fo Alabama for a chemotherapy treatment. Mollie ran into the Ronald McDonald House and began playing immediately — her parents told us she took her hat off for the first time in over a week.

We are so thankful that the Ford’s were able to get a room at our House. Our waiting list continues to be long, but with our upcoming expansion, we will be able to limit the number of families who must wait for a room. To learn more about our expansion, click {here}.

Mollie’s family has been so impacted by the Ronald McDonald House that they are now big advocates. They have set up a Red Shoe Run team in Mollie’s honor to share their story. Find their team {here}.

If you would like to donate to support families just like Mollie’s, please visit our donation page {here}. It costs the Ronald McDonald House $95 per family per night. Every donation helps.