In November of 2013, Levi went in for a “routine” procedure when it was found he had a mass that was obstructing his airway.  It was no ordinary mass, it was cancer.  At the time, his family did not realize this would be Levi’s first 11-day stay and the start to many, many days at Children’s of Alabama. Levi was diagnosed with Early T-Cell Precursor Lymphoblastic Lymphoma. 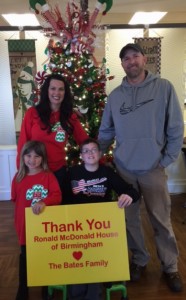 The first few nights after the mass was found, his family slept in the waiting room chairs at the hospital until a room opened at Ronald McDonald House in Birmingham.  Levi’s family never knew what to expect or when a test would be scheduled for their son so even an hour away was too far during this time.  They were able to have a bed, a shower and a little rest at the House while they met families just like theirs.  His parents recall, none of the families knew how long they would be here and even met some that had been here for months already.

“RMH in Birmingham is one of the most wonderful charities that you can ever be involved with.  The donations are kept there and used there.  We spent many holidays at the House during 2013-2014 and they do all they can to keep meals hot and children entertained.  It truly was a blessing during our time there.” – Lori Bates, Levi’s stepmom told us.

After donating for several years themselves, Levi’s family decided to offer wagons to area businesses to get help with donation efforts and the response was great!  They started with 10 wagons and ran out fast!  The community was great to respond to this fundraiser and Levi is super excited about the growth of it this year.

Lori said, “There isn’t anything that Levi is in need of or wants except to continue with his healing and your prayers but there are children going through the same place he has been and we want our family to be a part of a small blessing to other families in need.”

Families who understand the mission of the House because they have called RMHCA “home,” make some of the best supporters.