Kendall’s Cheering Squad is By Her Side 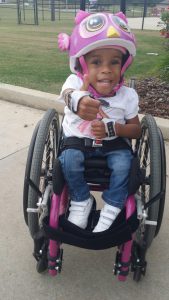 If you were to think of YOUR story .. where might it begin? Kendall’s begins long before she was born and as you will learn is a story that almost didn’t happen.

Kendall’s parents, Laura and Frank got married in 2007. They knew very early only that Laura had Poly cystic Ovaries and conception would not be viable for them. They were heartbroken, but they managed.

In March 2010, Laura woke up in extreme pain. She felt numb and didn’t know what to do. She went to the emergency room and laughed when the doctors asked her to take a pregnancy test.

Turns out, Laura was pregnant. “I got angry because I was sure that my results were mixed up…”

Soon after, Laura’s blood work came back and it turns out she was two months pregnant. This amazing news came on the morning of Mother’s Day. A day she could now celebrate with a very different meaning than ever before.

Because Laura’s pregnancy was such a high risk, no doctor would take her. When she finally found a doctor who would see her, the doctor kept trying to convince Laura to get an abortion. Laura went on a search to find a doctor who could make her pregnancy viable.

Sweet Kendall was due on December 23rd, 2011, but she was born a week early on December 16, 2011. Laura and Frank had a beautiful baby girl who weighed 4 lbs, 8 oz. Soon after birth, the doctors informed the family that Kendall had Spina Bifida and she would require surgery immediately. A day after Christmas and at just six days old, Kendall had her first back surgery. Her second surgery was soon after, at just 12 days old.

Kendall is now a very spunky and lovable 5-year-old who has had 11 surgeries to date. She doesn’t let anything slow her down — Kendall enjoys gymnastics, swimming, ballet, tennis, yoga and dance!