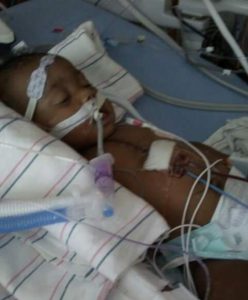 When Alicia was pregnant with her fourth child, her first daughter, she was so excited! She loved her little boys, but a little girl would be the perfect addition to the family. With each ultrasound and checkup during pregnancy, she was told everything was going as expected. The doctors did not expect any complications, but when Ary’anna “Faith” was born, that all changed. At birth, Alicia was told, Faith would need open heart surgery in Birmingham — a city 2 hours away, where she knew no one. With three boys under the age of 6, plus a newborn, Alicia’s hands were full. Now, not only does her daughter have to have open heart surgery, but she has to navigate a new city, away from home.

Alicia was heartbroken. Her little girl was sick and she didn’t know what would happen next. At five months old, Faith was set to have her heart surgery at Children’s of Alabama. Alicia and one of her sons came to Birmingham with Faith for the surgery pre-op. Her son, at four-years-old, could not stay in the room with Faith, and there was no open room at the Ronald McDonald House, so Alicia packed up her stuff and headed home to Montgomery, leaving her 5 month-old behind, in a hospital room, alone.

On her way back to Montgomery, the Ronald McDonald House called Alicia and were able to get her a room! Her family was able to stay at the House together. They were only expected to be with us for four days, but Faith ended up needing to be close to Children’s for six weeks. During that time, all three of Faith’s older brothers were able to stay at the Ronald McDonald House and visit their baby sister.

With four kids, Alicia didn’t want any of her children to feel left out. All three of her boys were able to enjoy the programming at the House. They loved when Hand in Paw therapy dogs came to the House, they went to Barons games, and were even here on a very special night. We had a “premier” night for the newest Star Wars movie that included life-size characters! The kids LOVED the Ronald McDonald House and even cried when it was time to go back to Montgomery.

Faith has recovered well from surgery and enjoys being at home with her brothers. They often have to come back for check-ups and the boys always want to stop at the Ronald McDonald House! 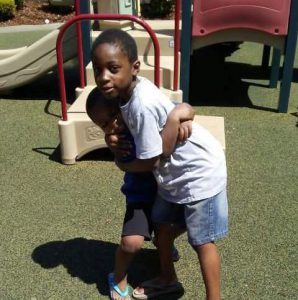