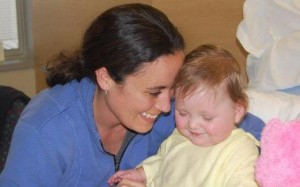 When you meet 15-month-old Mackenzie Jackson you cannot help but smile. Looking at this sweet little girl it would never enter your mind that she was anything but a happy, healthy baby. However, when Mackenzie was two months old she was diagnosed with congenital nephrotic syndrome, a disease that causes protein build up in the kidneys causing kidney failure.

She was flown into Birmingham from Mobile and spent eight months of her young life in the hospital before having her kidneys removed in July. Although the Jackson family was able to return home to Mobile after this they had to make the four and a half hour drive back once a week to have the dressing changed on her vascular catheter. During this time Mackenzie received dialysis at home, but when she suffered a collapsed lung the family had no choice but to return to Birmingham. It became necessary for her to start hemodialysis, but there were no places for a child as young as Mackenzie to get hemodialysis.

Upon their return to Birmingham, the Jackson family joined us here at the Ronald McDonald House. Mackenzie, her mother, and her grandmother went to the hospital four days a week for her hemodialysis which starts at seven in the morning and lasts three hours. On January 1st Mackenzie’s name was placed on the transplant list.

In a matter of weeks the Jacksons were informed that a perfect match had been found and that individual was willing to donate one of their kidneys to Mackenzie. This surgery was scheduled for March 11th.  Mackenzie’s family was so thankful to this kind stranger and hope to arrange a meeting so they can one day thank them in person.

While getting treatment at the hospital, the Jacksons have found a place to call home at the Ronald McDonald House. Mrs. Jackson explained how thankful they were for a safe and clean environment that they found here.  She explained that the House is more than just a place to stay, but it is the community that makes it so special. “When you enter the House you find people who understand the trials families are going through.”

We’re so thankful for the opportunity to not only know Mackenzie and her wonderful family, but to be able to share a part in her amazing story. She brings so much joy to everyone around her with her infectious smile, from the nurses at the hospital to the other families at the Ronald McDonald House. You can follow Mackenzie’s story further on her grandmother’s youtube channel at: http://www.youtube.com/user/alabambelle.