Importance of What We Do

Kathy Robson, our Director of Development, has a very close tie to Ronald McDonald House Charities‘ mission. At the age of 7, her son, Travis Moore, was diagnosed with Acute Lymphocytic Leukemia. Starting in 1992, he went through 3 years of treatment at Children’s of Alabama. In June of 1995, just one month after his treatments were completed, she can remember him saying “mommy, it’s back.” 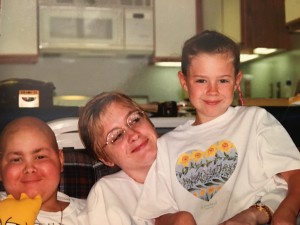 Even at 10 years old, he knew the unusual pain he had felt in his bones before … he knew he had relapsed. His oncologist Dr. Thomas Howard at Children’s of Alabama explained that once you relapse, survival rates decrease. Their family knew their journey was about to become even more challenging than it had been when the illness was first diagnosed.

Travis spent much of his childhood going through very intensive chemotherapies and spent most of the time ill in the hospital — his childhood was far from what you typically picture. By fall of 1995, the decision was made that he needed a bone marrow transplant. After it was found the family did not have a match, Travis was entered into the Bone Marrow Transplant (BMT) Registry nationally and internationally. Luckily, two perfect matches came out of the search.

At that time, Children’s of Alabama was just beginning bone marrow transplants and it was decided Travis’ best chance of survival would be at Fairview University of Minnesota Children’s Hospital now called University of Minnesota Masonic Children’s Hospital.  Tim Krepaski, RN was the BMT coordinator that Kathy spoke with — he kept her informed about the whole process. The date was set, Travis’ transplant was scheduled for January 31, 1996.

Travis was only 10 and his sister Abby was 7 years old when he had his transplant. Kathy, both children, and their father, step-mother and step-son all flew up on New Year’s Eve 1995. It was a blur for the family, with many meetings with the transplant team; Dr. John Wagner, MD, Tim Krepaski, RN and Pat Fidler, RN Nurse Practioner to prepare for the surgery.

The family stayed at Ronald McDonald House Twin Cities-Midwest throughout the whole process. Kathy remembers her daughter Abby loved staying at the House — she spent her time in the basement with the pinball machines, Pac Man game and loved shooting pool. She also cherished her special mother-daughter outings at the Mall of America. Abby told us, “I am incredibly grateful for the outpouring of love and prayers that surrounded our family during our time of need. I wouldn’t be the person I am today without the support from our community, schools, church family, the Ronald McDonald House, and of course, my family and Sandy. Being a teacher now, I know how something like that can impact a child so significantly. I was lucky to be surrounded by such selfless people.” 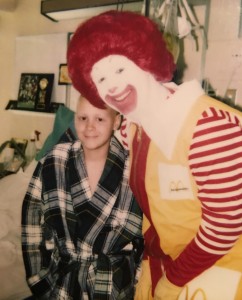 Kathy explained some of the additional hardships her family faced, “I was a single parent at the time of Travis’ diagnosis and during all of his treatment. I was out of work for approximately two years during this difficult time — I had a mortgage, car payment and monthly financial responsibilities that don’t go away just because you have a child who is sick and fighting for their life. If it wasn’t for the support of my church family, the school system in our area, the community and having the opportunity to stay at a Ronald McDonald House, I don’t know how I would have gotten through the hardest time of my life.”

Travis was given the gift of life early in the afternoon on January 31st — a day Kathy will never forget. “I remember thinking the donor must live in the mid-west somewhere because typically, it would be very late in the evening before he got the infusion. Little did I know that the best-kept secret was that his donor, Sandy Lentz from St. Cloud, MN, was right there in the very same hospital. I spent time in the chapel praying that day and later I was told that Sandy’s family was also in the chapel praying.”

Travis was only given a 30% chance of survival going into the bone marrow transplant, but he did very well initially after getting Sandy’s marrow. However, Graft vs. Host Disease was very difficult on his poor weak body. He became platelet-dependent and was in and out of the hospital with high fevers, high blood pressure, and infections that were side-effects of Graft vs. Host Disease. As a mom, that disease, after reading about it, scared Kathy more than anything else.

Kathy made a pact with her son, no matter how bad a day was, they would find one thing to be thankful for, no matter what. Each night Travis would pick that one thing he was thankful for. Some days it was just the fresh fallen snow on the ground. He loved watching it snow from the windows. Kathy laughs, “I still have a t-shirt that says “I Survived the Big Chill.” In 1996, Minnesota had record breaking temperatures and snowfall.” 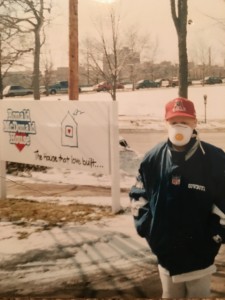 As a BMT recipient, you must stay in the area for 100 days after the procedure is complete. So Kathy and Travis were in Minnesota at the Ronald McDonald House until they flew home on May 15th. At his one-year checkup, they stayed at the House again, this time getting to meet Sandy, his donor. “It was a reunion that I will never forget. How do you thank the person that so selflessly gave her marrow to save a stranger’s life?” Kathy remembered thinking.

Sandy was only told the recipient was a 10-year-old boy that had Leukemia. She told Kathy she never hesitated and Tim, their coordinator, confirmed this fact throughout the process. At this time, the family knew Sandy would always be very special to them. Sandy and Travis bonded instantly that day and he still calls her every year on the anniversary date. Sandy has been at both Travis’ high school graduation and his wedding. The family could not imagine such important celebrations without the woman that saved Travis’ life.

Kathy is an amazing asset to our Ronald McDonald House team here in Birmingham. We are very lucky to have someone who knows the importance of our mission first hand.

“As a staff person at Ronald McDonald House Charities of Alabama, I know first-hand the importance of giving a parent the peace of mind that their home will still be there when they go back. I also know the vital importance it is to be a block from the hospital. The support a parent, a caregiver and the child receives while staying at a House from other families experiencing the same thing and the staff that is always here for you, is appreciated more than you will ever know. I absolutely love being part of a mission that 20 years ago was there for me and my family. My family and I were blessed to have the House in Minnesota as a home away from home and now I wake up each day excited to go to work at the Ronald McDonald House in my own hometown. We work hard to raise the vital funds to keep this House operating and continue serving families just like mine. I just have to walk out of my office and into the common areas and see one family and am reminded of the importance of what I do on a daily basis.”

Below is a note from Travis:

“I have been extremely fortunate in my life experiences since battling leukemia and my bone marrow transplant.  I credit my thirst and passion for life, my drive for adventure, and work ethic to my family and my childhood experiences dealing with illness.  Since I was 7 years old and my first bout with leukemia, I have always been a fighter and had this desire to live life to the fullest.  I am extremely thankful for my family, all the doctors, nurses, staff members, and everybody associated with my treatment and the treatment of childhood cancer and other illnesses. Especially, Sandy my donor for giving me the gift of life!  It is not always easy for both the patient and caregivers to see and deal with the suffering and sadness that comes with childhood illness.  I hope that hearing my story and seeing the photos will give some hope and inspiration to both the patients and the caregivers.  They are the true heroes in the world and my inspiration.”

Check back soon to learn about Travis’ visit to Minnesota – he celebrated his 20-year anniversary by going back to the place his family called home during his treatment. 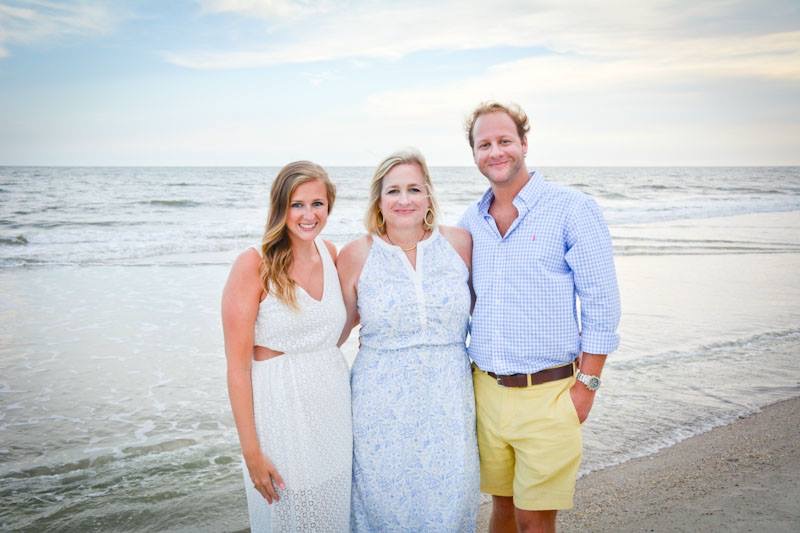