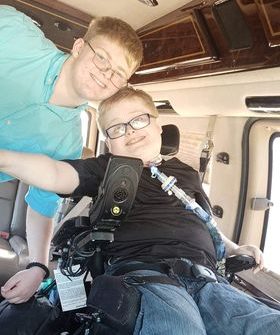 2022 Update: We recently caught up with Brandi, Colton and Logan’s mom, and are thrilled to share that the boys are doing so well!

In the four years since the accident, Logan has re-learned how to walk and his parents are so proud that he is living a full life! Logan recently won third place in the science fair; attended homecoming; and serves as the athletic mascot for his school!

Colton, whom doctors feared would be almost completely paralyzed, is able to lift his arms and has access to a motorized wheelchair. Colton is able to play video games and play with his friends!

With the help and support of the Ronald McDonald House, the Morgans were able to stay with both their sons during the recovery.

“If not for the Ronald McDonald House, I don’t know what we would have done,” Brandi said. “Logan was released before Colton and it didn’t seem right that we separate at the time. My husband and I needed to be with them, especially Colton. We had to train on how to take care of him and there was no other way we could have done that.”

Brothers Logan and Colton Morgan have always been very close. They both play baseball and Logan also plays football. They may fight like cats and dogs, as siblings do, but at the end of the day they are each other’s best friend. 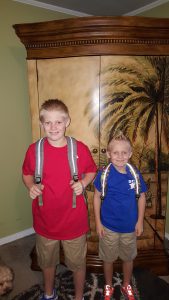 On March 31, 2018 in their hometown of Butler, Alabama, parents Brandi and Andrew were preparing to go Easter shopping. They asked Andrew’s father, who lives just across the street, to look after Colton and Logan while they were out. Brandi’s one rule when the boys cross the street to grandpa’s is this: always hold hands. So the brothers grabbed on to each other and started crossing. No family is ever prepared for what happened next.

Before anyone could react, a car came down the road and struck Colton and Logan. Because they were holding hands, they were both hit directly. Their father, Andrew, performed CPR on Colton, 8, when he stopped breathing on site. The brothers were rushed in the same ambulance to a hospital in Butler where Colton died but was brought back by the medical team. 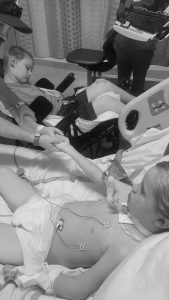 In addition to suffering from a deep laceration in his knee, 12-year-old Logan, had severe brain trauma. Doctors had to temporarily remove part of his skull to relieve pressure on his brain.

Colton is still recovering from a spinal cord injury, brain stem injury, severe brain trauma, damage to his spleen and a pelvic fracture. The doctors said he would never move again, but his mom, Brandi, says he is making amazing progress.

Brandi said Colton has been raising his arms, moving his fingers, and moved his feet and has even picked up balls and put them into a bucket!

Colton recently spoke for the first time since the accident through a device that is hooked up to his ventilator and was able to say, “I love you, Mommy.” 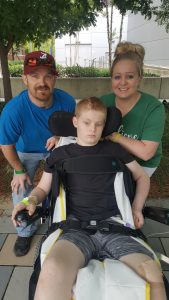 For Logan the recovery process is slower because of the extent of his traumatic brain injury. He has been released from the hospital and is now doing outpatient therapy.

Brandi says it’s been a huge help that their room at the Ronald McDonald House has enough space for a hospital bed for Logan. His nurses can also come by to check on him and these are things they couldn’t do at a traditional hotel.

“Logan is always in a stable environment being here,” she says. 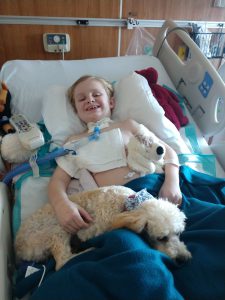 Colton with his dog Paul

The Morgan family has been able to meet and bond with the other families who are also staying at the House which has been great, Brandi says.

“It may not be the same story, but you’re not alone,” she said.

Brandi mentioned that being able to do laundry at the House has also helped them.

“You don’t think that something so simple could be such a big thing,” she said.

Having hot meals ready at the House has also been a blessing to the Morgan family.

“When you have one child in the hospital or that’s injured, that’s bad enough, but when you have two, we haven’t even had time to cook,” Brandi explained. “So when you have meals provided for you and you don’t have to worry about, “When am I going to have time to cook in between taking care of two children?’ That’s been a huge help.”

“This place has literally been a God-send to us,” Brandi said. “If it wasn’t for the Ronald McDonald House I don’t know what we would’ve done.”

Brandi gets emotional when sharing why people should support the House.

The Morgan family is staying at the Ronald McDonald House for the foreseeable future while the boys continue to recover. RMHCA is so grateful for the wonderful people that help make our mission possible. Please consider giving financially or volunteering today so we can continue helping families like the Morgan’s.