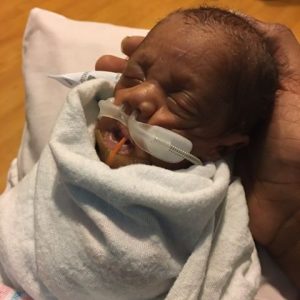 Esha’s little boy, Deon, was born early. In fact, he was born 23 weeks early, weighing 1 pound and 5 ounces at birth. Esha is mom to Deon and his big brother, Quinlavan Jr.

“I was scared because Quinlavan wasn’t a preemie,” says Esha. “I prayed, Lord, is he alright? I had to stay calm to keep my blood pressure down. I didn’t know what to expect when I went to see him.”

Esha lives in Dothan, Alabama, and was transported to UAB Hospital by ambulance in late August. Deon would have been a Christmas baby if he was full-term. He came early on August 31, which is also Esha’s birthday.

Esha is relieved her older son Quinlavan Jr can stay at the Ronald McDonald House during the day with dad Quinlavan Sr. Esha knows that if Quinlavan Jr had to be left in Dothan with family, she would be worried about him and would have to travel home to check on him while leaving Deon in Birmingham.

“It makes me feel good to all be together,” she says. 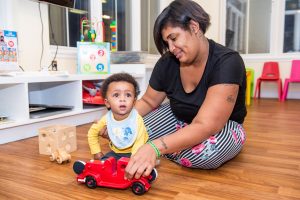 Esha plays with Quinlavan at the House.

Esha says Quinlavan Jr. is already a proud big brother and wants to touch Deon through his incubator.

Esha believes that being near to Deon has helped him develop more optimally than if she wasn’t able to be near him.

“At first he looked rough when he was born. His skin wasn’t developed fully. He has come a long way. He’s growing,” she says. 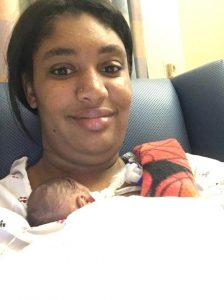 At the Ronald McDonald House, guest families are provided dinner every night by generous volunteers in the community. Sharing a meal together gives families the opportunity to meet and share their stories with each other.

“When I first got here, I didn’t know anyone yet and I would sit with Quinlavan. Now, I love it. The food is good and I like meeting new people every day,” she says.

Esha shares that if she was not able to stay at the Ronald McDonald House, she would have to drive back and forth from Dothan to Birmingham.

“I can’t afford a hotel every day. I think it’s a good thing,” she says.

The Ronald McDonald House will continue to have an impact on Esha and her little boy Deon when he comes back to Birmingham for follow up appointments. However, Esha isn’t sure when they will be able to go home, as so much depends on how well Deon is progressing.

Esha and Quinlavan Sr. appreciate everyone who supports the House.

“We appreciate it and thank you so much! The Ronald McDonald House helps when you don’t have money for food every day and we appreciate it,” she says.