Family raises $4,000 in 24 hours in memory of their daughter 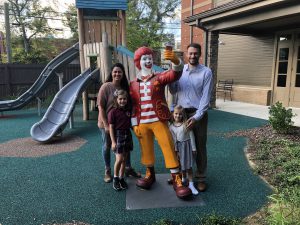 The McCarty family finishes a tour of the Ronald McDonald House.

Twenty-four hours can change a life. Over one day in September, one Hoover family changed the lives of four families who need the Ronald McDonald House.

Krystal and Todd McCarty are originally from Mobile. These high school sweethearts attended college together at UAB. In Todd’s fourth year as a medical student, the couple was ready to welcome a daughter, Sara Kay, in September of 2009. Around 21 weeks, they received devastating news. Sara Kay had a condition called triploidy, which occurs when there are three of every chromosome. Sadly, it is fatal and Sara Kay passed away shortly after birth.

Krystal and Todd have never forgotten Sara Kay and have made it a point to share her life, especially with their two daughters, Ava Marie, 7, and Charlotte, 5. It was a conversation with their girls last year that sparked the idea to do something in Sara Kay’s memory.

“Around Sara’s birthday last year, we were at Disney World for Charlotte’s birthday,” Krystal said. “Charlotte wanted to know why we didn’t do a birthday party for Sara Kay. It was at that point that Todd and I started thinking about how we could honor Sara Kay.”

After doing some research, Todd and Krystal settled on a Facebook Fundraiser to benefit children and their families in some way so they researched several charities. They settled on Ronald McDonald House Charities of Alabama in part because several of their neighbors volunteer with the charity and Todd ran in the annual Red Shoe Run after encouragement from one of his medical school professors.

“And it easily could have been us staying at a Ronald McDonald House,” Krystal said.

So they set up the Facebook Fundraiser with a goal of $2,800. Suffice to say, their friends and family blew that goal out of the water!

“Donations continued to pour in and I was speechless,” Krystal said. “I cried and I cried because I was just so blown away by the generosity of our friends and family. People we hadn’t talked to in years gave.”

In an update on the fundraiser’s page, Krystal gave a moving message to her friends and family.

“I can honestly say that this is the first of Sara’s birthdays that I’ve cried happy tears,” Krystal said. “Thank you so much for your support.”

“It’s a beautiful way to honor our daughter and preserve her memory,” Krystal said. “That’s kind of always been my biggest fear, is that she’ll be forgotten. You don’t get a birth certificate in the state of Alabama when your child passes away shortly after birth so there’s no record of her.”

Krystal and Todd hope to continue this birthday tradition for Sara Kay and see how it evolves. They’ve already talked about having a gathering at their home and hosting another fundraiser or supply drive.

Everyone here at Ronald McDonald House Charities of Alabama is grateful for their generosity and that of their friends and family!