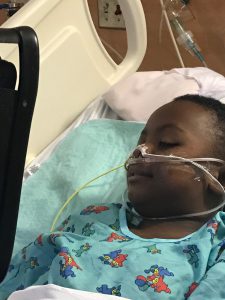 Christian in the hospital for his first round of chemo. (Courtesy Vanessa Leverett)

In late July, most families are caught up in the back to school rush. In the Leverett household, mom Vanessa had no peace of mind.

Her 6-year-old son, Christian, was about to enter the first grade but Vanessa noticed a strange knot on the back of his head. Something was telling her this was wrong so after her husband Chris had gone to work, she decided to take Christian to the emergency room.

Christian seemed to recover some of his energy for the first day of school but that night he couldn’t keep any food down. Vanessa took him back to their doctor, who checked Christian’s blood. When those results came back, she told them to go straight to the emergency room.

The unease was mounting while the ER doctors re-tested Christian’s blood.

“Then doctor came back in and said, ‘We need to talk. Your baby is very sick,’” Vanessa recalls.

That’s when Chris and Vanessa received a huge blow: Christian had a very aggressive form of childhood cancer: T-cell ALL. They felt blindsided. This was their sweet boy who had never been seriously ill. How could this have happened, they wondered.

Christian was admitted that night to the hospital and would spend the next 28 days there getting chemo treatments. But as the trial went on, his doctors in Mobile weren’t happy with how the cancer was responding to the treatment. They referred the family to the doctors at Children’s of Alabama for a new type of cancer treatment.

The family realized that getting treatment in Birmingham would be a long haul in so many ways. Christian is only part way through a 72-day chemo trial. The reality of having to relocate and figuring out how to pay for those costs was overwhelming.

“And life is still going on at home, bills are still there. And now we had to figure out how to pay for all the travel expenses,” Vanessa says. 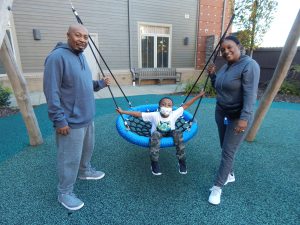 L-R: Chris, Christian and Vanessa enjoy swinging on the playground.

Thankfully, the Ronald McDonald House is available to help ease that burden for the Leveretts and so many other families.

“If we had to just purchase food every day, we’d be out at least $100 and then you add a hotel fee. We couldn’t afford that. It’s a huge financial burden the Ronald McDonald House is lifting,” Chris explains.

But the House provides more than financial relief. Because Chris still works back in Mobile, he was concerned about leaving Vanessa and Christian.

“We’ve been in Mobile all our lives. But when you’re about to stay somewhere you’ve never stayed before, that’s tough,” Chris said.

“Ninety percent of what we’d have to do to take care of Christian, the Ronald McDonald House has already taken care of. The other 10% is us going to the hospital. It’s a good thing it’s here because it’s a big burden to understand all that we have to worry about,” Chris said. 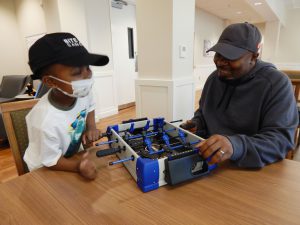 L-R: Christian and Chris get time to play.

“When you get back to the Ronald McDonald House from the hospital, you have your food, you have activities. Christian can play at night and it’s so nice,” Vanessa said.

The treatment Christian is undergoing is a relatively new way to fight this type of cancer and doctors are constantly running tests to target different parts of the cancer. Chris and Vanessa say being

at the Ronald McDonald House has helped immensely to keep up with all the information and doctor’s appointments.

“I just feel so comfortable that we can just get up in the morning and walk to the hospital. It’s right there!” Vanessa says, looking at Children’s of Alabama through the window of the Ronald McDonald House.

At this time, Christian’s body is responding well to the cancer treatments and his parents say he’s been a little tired. It’s a relief to Chris and Vanessa because other pediatric cancer patients fight fevers or even have to be admitted to the hospital for the entirety of their cancer treatment. Not so with Christian. He wears a mask and gloves most of the time to reduce his exposure to germs in his environment and from other people.

“Christian has been so brave through the whole process because he’s not going to let something happen to himself,” Chris said. “He’ll let us know if he feels there are too many people around. And that’s huge for me, that he’s 6-years-old and can stand up like that.”

The Leveretts are staying positive, but the reality of being away from home during the holidays can be devastating for a family.

“We know the Ronald McDonald House will make us feel like we’re home for Thanksgiving and Christmas,” Chris says. 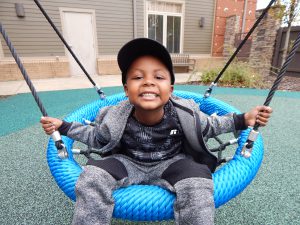 Much like your own home, we want our Ronald McDonald House and Family Rooms to be filled with love, laughter and hope throughout the holidays. We need your financial support to make this happen.

“When you give, you’re promoting happiness,” Chris said. “We look at Christian and even though he’s sick, it’s just a big relief to be together and see him happy.”

All of us at the Ronald McDonald House are grateful for your support because you have the power to give a child the best gift of all—family. Please give today or sign up to be a volunteer so Ronald McDonald families can find peace of mind this holiday season.