Caden’s Story from his mom, Jennifer 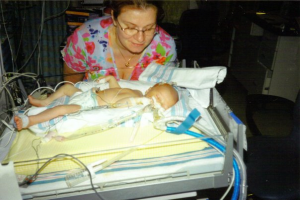 Caden Andrew was born on June 1, 2005. My pregnancy was a normal pregnancy. I had an ultra sound done at 24 weeks and everything was fine. They told us that we were going to have another boy. We were excited. I left the doctor’s office happy. Around 35 weeks, I went into premature labor. The doctor stopped it and I went home. A week later, I went into premature labor again, and they stopped that as well.

Around 38 weeks, I went into labor again. I had scheduled a c-section for June 8th. They went ahead and did a c-section. Once they got Caden out I heard him cry once and then it was quite. I could tell by the look on the doctor’s face that something was wrong. The neonatologist came up to the top of the bed and told me that they were having a hard time getting Caden to breath and that they were not going to be able to bring him to me that they had to take him to the nursery. He then looked at my husband and asked my husband if he wanted to stay with me or go with him. I told him to go with Caden. I had planned on getting my tubes tied. My doctor asked me if I still wanted to get them tied and I said yes, because if Caden didn’t make it I didn’t want to have any more babies. After surgery they wheeled me to recovery.

I saw my husband’s face and the doctor’s, I knew that there was something wrong. The neonatologist told me that they were not sure what was wrong with Caden but that it could be one of two things. Either it was Congential Diaghramatic Herna (CDH) or something else but they wanted to transport him to Huntsville Hospital because the equipment there was much better than the equipment at Crestwood Hospital. My doctor told me that if Caden stayed at Huntsville Hospital they would transport me as well, but they were not sure if they would send him to Vanderbilt in Nashville, TN or Children’s Hospital in Birmingham, AL. They wheeled him to my bedside in a covered bassinet. I did not get to see him because the paramedic was in the way.

Four hours later we received a call that Caden did in fact have CDH and that since he was otherwise healthy they were going to transport him to Children’s Hospital in Birmingham, AL because that was their specialty and since he was otherwise healthy they wanted to give him the best chance possible. CDH is where there was a hole in the diaghram that allows the intestines to get into the lung cavity and affect the development of the lung. They told us that they would call once they got him down there. By now it was midnight. I told my husband to go home and get some sleep and then in the morning he needs to go to Children’s Hospital and be with Caden and not to worry about me. That has a horrible night in the hospital. My husband David went down that morning to be with Caden.

I got a call from a nurse in the NICU at Children’s asking me if they could put in a PICK line. I told them that was okay. David met with the resident surgeons and nurses the next day. They explained Caden’s condition to him and all of the risks. Caden had a left CDH and that his left lung was under-developed due to it but they weren’t sure how much until they do surgery. They told him that they would have to do surgery but that they wanted to wait until Caden got a little more stable. Fortunately, Caden never had to go on ECMO. Caden was born on a Wednesday evening by c-section and Friday afternoon, I talked the doctor’s into letting me go so that I could go and be with my son. They really didn’t want to let me go so early but they went ahead and discharged me.

Saturday morning, I got to see my son for the first time. I was so emotional that I could not cry. He looked so pitiful, hooked up to all of the machines. I just sat next to him caressing him. They had to keep him sedated because he kept trying to pull on his tubes. We stayed at the Ronald McDonald House and received a call late Sunday evening that they were going to do surgery early Monday morning June 6th. We got to the hospital early that morning. We requested a chaplain to come and pray for Caden before his surgery. It took a while for one to come but finally we were able to have a chaplain pray over him. They wheeled him down to surgery. We got to meet the surgeon for the first time. He explained to us what he was going to do. He told us that there are all kinds of things that he could tell us to worry about during the surgery but that he was going to worry about them that we needed to stay positive. He told us that he would answer any question that we asked but there were things that we really shouldn’t worry about. 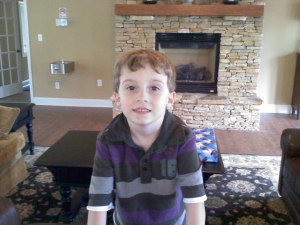 Ultimately we knew that Caden would not survive without the surgery, so we didn’t ask too many questions. About 2 hours later he came back out and told us that the surgery was a success. He said that Caden’s left lung was about 1/2 to 1/3 the normal size but that it should continue to grow until he is about 8 years old. Caden was sent back up to NICU. His recovery has pretty good. They took the ventilator out and Caden started struggling. His stats started to go down, so they put the ventilator back in. At this point, I still had not been able to hold my sweet boy! I cried everyday! I just so wanted to take my baby home! I would sit each day all day by his side. A few days later Caden decided that it was time to take the ventilator out and he did. The doctor said that he was getting ready to remove it again but Caden had beaten him to it.

I was finally able to hold my baby!!! It was such an emotional time that I could not cry. I was beyond tears!! Slowly they started disconnecting tubes. They inserted a feeding tube into his nose and began giving him Pedialite and then they started giving him breast milk. They decided to move him to the Special Care Unit. They started trying to bottle feed him and he would take some by mouth and then would act as if he would throw up and lots of times he did throw up. So then they would go ahead and put the remainder of his food in his tube. We also had an occupational therapist work with him to try and get him to take all of his food by mouth. Everyone kept telling me how good she was. He would take some from her. He then started projectile vomiting.

They decided to do an ultra sound to see if he was having an emptying problem. The ultra sound should that he had developed pyloric stinoisis (not sure of spelling). It is a condition that babies between 3-6 weeks develop. The doctor said that it is pretty common but it is not common for babies to have both. It is basically where the muscle that empties your stomach into your small intestines constricts and does not release, allowing your stomach to empty. The surgeon said that he wanted to do an Upper GI to make sure because of the way that he performed the hernia surgery, it might make the ultra sound in correct. So the next morning they did an Upper GI and it confirmed that Caden did in fact have pyloric stinoisis.

The surgeon came and saw me and said that the surgery could be done lyposcopically. In a way I was glad that he had this condition because I was hoping that it would explain why he was not able to keep his food down and why he was not eating much from the bottle. It turns out that was the case. Once he recovered from surgery, he was able to start eating by bottle and keeping his food down. 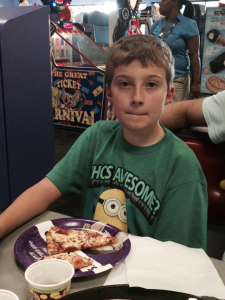 He was on Zantac and Reglan to help with the reflux. Because he burns so much calories breathing, they wanted to fortify his breastmilk by adding similac powder to it. A few days later we were released from the hospital and ready to go home. Caden went home eating a bottle and breathing room air!!! No oxygen and No feeding tubes!! We were so fortunate. We prayed and thanked God for sparing our angel. Caden is now exclusively breastfed. We no longer have to give him fortified milk. He is 3 months old and weighs 13 pounds!! We are going to have to have another surgery in a couple of months because Caden has two small hernia on either side of his groin and they want to fix it. But all in all, the doctor is very pleased with his progress.

He has told us on lots of occasions how tough he is and how much better he is doing than most babies with this condition. We have another son named Logan. Logan is 2 years old and loves his brother. We went to Birmingham last week for a follow up appointment and I told the surgeon that I was scared to get too excited because I was afraid that something might set him back. The doctor said that Caden is like a normal baby. He said that there could be a chance that his diaphragm will pull from his side but they will monitor him for a while. That really made me feel good.

He is now 10 years old and doing great!

[Read more of our Family Stories]