A Reason to Smile

Alix is a 16-year-old from Haiti who broke both of his upper and lower jaw bones in an accident. Unfortunately, Alix went without medical treatment for more than two years, sealing his mouth shut and limiting his ability to eat and speak.

While serving on a mission trip treating patients in Haiti, UAB Dr. Peter Waite met Alix and arranged for him and his older sister Sallie to come to Birmingham to repair his jaw. While in Birmingham for the surgery, Alix and Sallie stayed at the Ronald McDonald House.

Alix and his sister arrived at the House having never traveled outside of Haiti. Unable to speak English, they were frightened and uncertain about Alix’s condition and his impending surgery. Initially, communication was a challenge because the pair could only speak Haitian Creole. However, with the help of the internet and volunteers recruited from UAB’s International House, Alix and Sallie soon felt welcomed and greeted us warmly with thumb’s up signs.  They were surprised that there was no limit on water usage and plenty of food and snacks in the kitchen.

Prior to his surgery, Alix was undernourished and unable to chew solid foods. He had few friends and dropped out of school because he was embarrassed by his inability to speak. After recovering from the surgery that included removing two of his ribs to repair his jaw, Alix thoroughly enjoyed the meals provided by volunteers at the House. He enjoyed shooting hoops on our playground, playing soccer and making friends with other children at the House. Best of all, Alix had a smile on his face for the first time in two years! 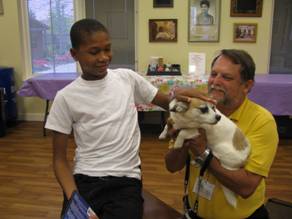